The Rocky Mountain High Intensity Drug Trafficking Area Report of 2015 (RMHIDTA) on the impact of marijuana in Colorado has been finalized, and is being cited often.  The RMHIDTA is a branch of government drug control, and pro-prohibition.  The White House states the agency’s primary mission is to “dismantle and disrupt drug trafficking organizations.”

This report is often cited by government agencies, law enforcement professionals, political groups, and religious groups that favor prohibition, as well as national news outlets and media. The report is biased, and data implications are cloudy and sensationalized.

In the first section, “Impaired Driving,” the first statistic under the title “Some Findings” cements the tone for the whole report:

In 2014, when retail marijuana stores began operating, there was a 32% increase in marijuana-related traffic deaths in just one year.

~ Excerpt from the Rocky Mountain High Intensity Drug Trafficking Area Report Final of 2015.
This misleading statement is listed first in the Executive Summary and listed first under “Some Findings.”

A 32% increase in marijuana-related traffic deaths? Wow! You’ve caught my attention. Marijuana must be a dangerous drug!

How many people go to a cited report for data, check to make sure the source is legit, then copy and paste the statistics to fit their need? A lot. The data then gets shared all over the web with like-minded individuals. Many people just read the Executive Summary and collate information and opinions from there. The above 32% statistic is the first one listed in the Executive Summary and the first statistic stated under the subtitle “Some Findings” as well. Unfortunately, it is a deceiving statistic and does a disservice to the general public and those seeking the truth about the impact of marijuana legalization in Colorado.

To the Rocky Mountain HIDTA report’s credit, the definition for “marijuana-related” was given under the Definitions section in the beginning of the report, and not in small fine print at the end (aging eyes are grateful):

Marijuana-Related: also called “marijuana mentions,’ is any time marijuana shows up in the toxicology report. It could be marijuana only or marijuana with other drugs and/or alcohol.
~ Excerpt from the Rocky Mountain High Intensity Drug Trafficking Area Report Final of 2015. Definition of “Marijuana-Related.” The term “marijuana-related” is used in this context throughout the report. It is proven that marijuana remains in the system even after the influence wears off.

Truth-seeking policy-makers and statisticians evaluating the effects of legalizing recreational marijuana and retail sales of marijuana can see that the “32%” quote is a correlation clouded with variables, and a blatant attempt at journalistic sensationalism. Causation is implied, by beginning the sentence with “the year marijuana retail stores began operating,” but not proved. It is carelessly suggested that marijuana use caused more traffic deaths by the wording “marijuana-related traffic accidents,” without providing the proof needed to determine causation.  An increase is mentioned, but there’s no mention of other variables, such as the population and traffic increases, or reporting and testing changes. There are also random quotes and stories throughout the report about the negative effects of marijuana, but none about the positive effects.

That’s not saying the 32% statistic is a lie, based on Rocky Mountain’s definition of “marijuana-related,” they covered their tracks well.  At any time they can holler “it’s not our fault the reader didn’t read the definitions and made false assumptions.” But to look at the impact of marijuana in Colorado, we need to look at the data in context with known medical facts and acknowledge the multiple contributing factors to events.

Four factors that cloud the relevance and correlation of the 32% quote:

In fact, the Rocky Mountain Colorado Impact report points out on a separate page the lack of causation:

Marijuana-Related: also called “marijuana mentions,’ is any time marijuana shows up in the toxicology report. It could be marijuana only or marijuana with other drugs and/or alcohol.
~ Excerpt from the Rocky Mountain High Intensity Drug Trafficking Area Report Final of 2015.
~ The data does not prove that marijuana was the cause of the incident.

Detecting marijuana does not mean marijuana was the cause of the accident. Particularly when an infinite number of reasons for fatal accidents exist.

The illegal drug consumers are not the (generally) law-abiding citizens changing their recreational and driving behaviors because of legalized recreational and retail marijuana. The report later states that 30% of operators testing positive for marijuana had other drugs in their system (not including those who had only pot and alcohol). It would be far-fetched to theorize that legalizing marijuana influenced the decision of this 30% to drive drug impaired.
Though the double-dipping alcohol and marijuana drivers are deserving of study, there are scenarios to debate and medical literature to review, the group needs to be set aside and categorized separately to get a more accurate image of the impact of marijuana legalization in Colorado. The Rocky Mountain High marijuana impact report states that 37% of operators that tested positive for marijuana, had marijuana and alcohol in their system.  When evaluating the impact of marijuana legalization in Colorado on drugged driving, looking at legally impaired marijuana-only caused crashes provides a clearer picture.
Until driverless cars are mainstream, the number of fatalities will be higher (or miraculously) equal to, the number of crashes.  There are years when the number of crashes go down, but the number of fatalities increase. The number of fatalities are useful for economic analysis and community impact, but the number of accidents are a more accurate indicator of the impact of legalizing recreational and retail marijuana on drugged driving.

Figure 4. DUI and DUID Fatal and Injury-Causing accidents have decreased since 2011 (after the advent of legalizing recreational and retail marijuana).
Source: COLORADO STATE PATROL ANNUAL REPORT, 2014

We’re not going re-create the RMHIDTA report with a pro-legalization spin in this article, but let’s take a quick look at some 2014 drugged-driving statistics to get a glimpse of reality from a more reliable source. A Colorado State Patrol Department 2014 report comparing accident causes, shows only a comparative half-percent increase for DUI and DUID caused fatal accidents and injuries from 2013 to 2014. 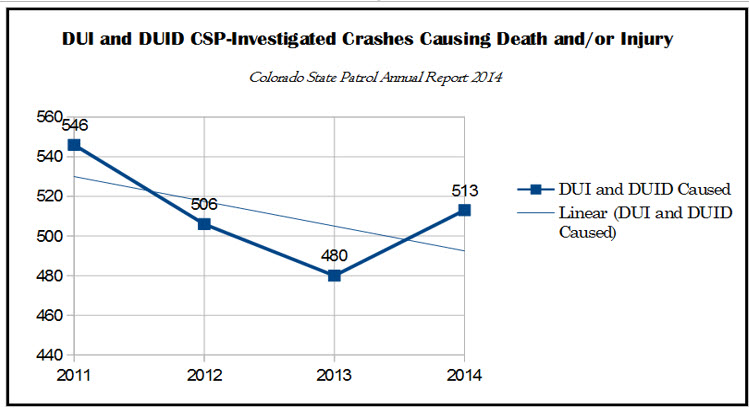 Figure 5. A graph with data from the 2014 Colorado State Police report on DUI and DUID caused accidents shows the impact of marijuana legalization has not caused crash levels to increase over the pre-legalization year of 2011.

The CSP annual report states there was a 6.9% increase in DUI and DUID fatal and injury crashes from 2013 to 2014, but the number of accidents is still lower than 2011, the year before legalizing recreational marijuana.  There was surprisingly a drop from 2012 to 2013, the first year recreational marijuana was legalized in Colorado.  Looking at longer trends, we see that even with the 2013 to 2014 increase, the number of crashes did not reach the higher levels of the pre-recreational legalization year. Longer trends are more indicative of the impact of marijuana in Colorado than shorter trends.

The Rocky Mountain High Intensity Drug Trafficking Area report on the impact of marijuana in Colorado has interesting sources, but it only provides a slanted, often deceiving view.  Journalists, radio personalities, and fact-finding websites have found blatant errors and sensationalist reporting reminiscent of the Drug Wars, Reefer Madness, and Alcohol-Prohibition eras.  It is clearly a biased voice against marijuana legalization. Dangerously, our government officials, law enforcement professionals, health professionals and politicians use this report, take numbers and statistics out of context, and forget Statistics 101—correlation does not mean causation.  The authors of the RMHIDTA report are counting on readers to forget the lessons of Statistics 101. Serious policy makers seeking the truth will blow the smoke away, look at causations and correlations, and help keep the public informed about the real impact of marijuana in Colorado.