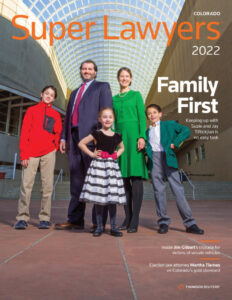 Denver DUI attorney Jay Tiftickjian is no stranger to being named a Colorado Super Lawyer. In this year’s 2022 Colorado Super Lawyers, he appears with his family on the cover of the annual publication. The article describes how both Jay and his wife, prominent estate planning attorney Suzie Tiftickjian, raise a family of three children while both leading successful law firms.

The article, Family First, details how both Jay and Suzie found interest in the law as well as some notable cases in their early careers. Also are the 15 marathons that Suzie has run, Jay’s love for playing guitar, and the many youth activities and sports the couple is involved with.

Jay goes in depth as to how he became a DUI lawyer. In law school, he met esteemed DWI lawyer Michael Taheri in Buffalo, New York. Jay interned with and took classes from Mike at the University of New York at Buffalo School of Law. Jay wanted a practice like Mr. Taheri’s, defending clients charged with alcohol and drug related driving offense.

Upon graduating from law school, Jay joined a large firm in 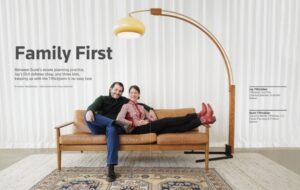 “I am honored that Super Lawyers reached out to Suzie and I about this story,” says Tiftickjian. “We were not told we were being considered for the cover, so when the issue came out it was a pleasant surprise. I always figured cover stories were reserved for large firm lawyers with marketing departments. The exposure didn’t cost us a dime, and seeing my beautiful wife and children on the cover is an honor.”