Is it Dangerous to Drive in Colorado?

Driving has never been considered a safe activity, and driving under the influence of alcohol, pot, or other reaction-altering drugs increases the risk of serious injury and death—for the driver, and others on the road.  But based on percentages of fatal accidents and population, the likelihood of getting killed in a motor vehicle accident on Colorado roads is very slim, with or without the legalization of recreational marijuana, particularly if you’re wearing your seatbelt. A Colorado Department of Transportation “Transportation Facts” report pointed out back in 2011 that half of the traffic fatalities would have survived, had they been wearing a seatbelt.  (The National Safety Council reports your chances of dying in a motor vehicle accident nationally are 1:112, and you are more likely to die from intentional self-harm, poisoning, heart disease or cancer.) 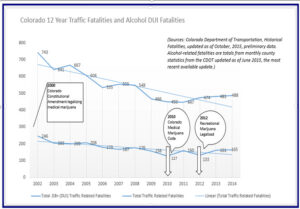 Alcohol-related fatalities are in the same ballpark, and non-alcohol related fatalities did see an increase in 2012, 2013 and 2014, albeit a statistically insignificant one from 2013 to 2014. So did drinking drivers switch to pot then go back to drinking? You’ll have to ask the drivers to know for sure, but you can be assured law enforcement agencies, politicians, and policy makers want to find out.  There were expected upticks in fatalities, but were these fatalities from cannabis consumers? 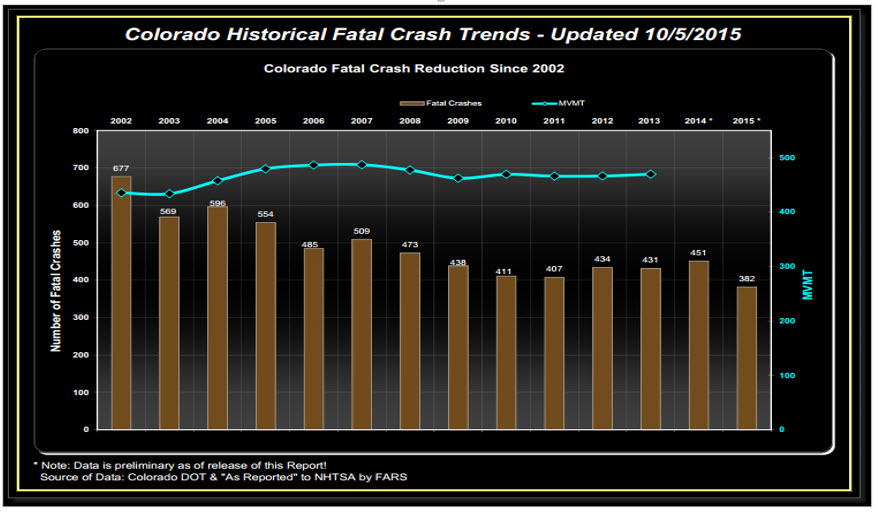 Figure 4: Source: Colorado State Patrol Annual Report, 2014. Indicates trooper-investigated DUI and DUID fatal and injury crashes saw a decrease from 2011 to 2014. Those years had a new medical marijuana laws in place, the legalization of recreational marijuana and the first year of legal retail marijuana sales in Colorado.

Did DUIs Increase in Colorado After Marijuana Became Legal?

Overall, Colorado DUI and DWAI court filings continued to decrease, even after recreational marijuana was signed into law December 10, 2012. 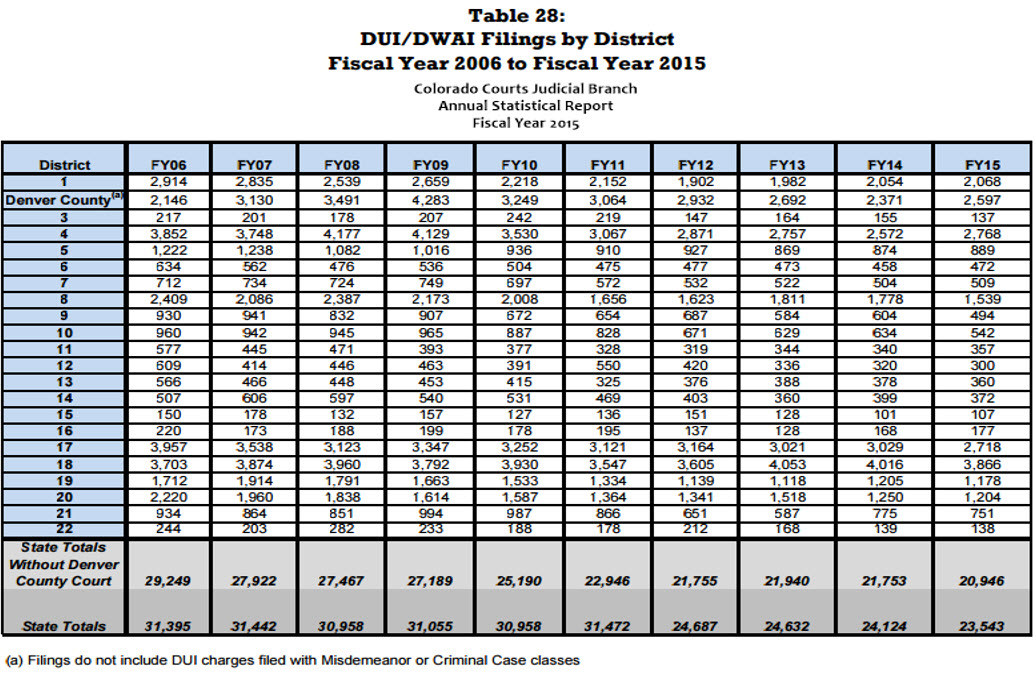 Figure 6: This chart is from the Annual Statistical Report for Fiscal Year 2015 from the Colorado Courts Judicial Branch. Overall, DUI and DWAI filings have continued the downward trend.

Looking at long-term trends (Figure 6, labeled Table 28), we can see that Colorado DUI and DWAI court filings have been on a downward trend since 2006.  Denver County did have a spike in increased DUI/DWAI filings in the latest fiscal year, 2014-2015, the year retail sales of marijuana reached new highs. (Pun intended.) But it should also be noted that Colorado had new breathalyzers handed out in 2013 (if things went as scheduled as reported in the CDOT Annual Report 2012, Office of Transportation Safety and Traffic Engineering Branch), and 2014 was the year state-wide marijuana blood testing underwent hefty changes with the Colorado State Police. A pilot saliva testing program started in 2015.

In the last few years, most notably in 2014 with the legalizing of legal retail sales of marijuana, there has been increased attention by law enforcement to “driving while high.” A million dollars was spent by the Colorado Department of Transportation for the “Drive High, Get a DUI” awareness program. Without a doubt, police were acutely looking for signs of marijuana. The nation is watching Colorado, and the police are out to find the driving while drugged drivers.

2014 was the first year the Colorado State Police put out a report announcing year-long data collected on marijuana-related DUI violations, which we will report on next. The keyword in the report? “Suspected.” The report is based on suspected use, including “smelling marijuana.”  MADD (Mothers Against Drunk Driving) has changed their vision statement to include “help fight drugged driving,” law enforcement officers are attending special training sessions to deal with drugged drivers, and conferences are being held to discuss strategies for documenting the data and dealing with the testing nuances of legalized marijuana.  Slides from the 2015 Driving High Conference in Chicago that catered to traffic and law professionals from Colorado, Washington and Oregon, pointed out state patrol schedules changed for more frequent visibility and high visibility efforts were enhanced.

According to the Denver Department of Safety, there were 8 tickets for public display and consumption of marijuana in 2012, and 891 in 2014, and tickets for marijuana violation in parks went from 0 in 2012 to 295 in 2014.  However, tickets for possession decreased almost 50% between 2012 and 2014. Clearly, an effort to inform the public to the nuances of new marijuana laws was being made by issuing violations. (Do you really think nobody smoked marijuana in parks prior to 2014?)

Yet, with all this increased attention on drugged drivers and all the cannabis that’s gallivanting around Colorado, Colorado roads remain safe.  The most potentially dangerous years are now written into history. Data specialists can get their high crunching numbers while creating benchmarks and warnings for policy-makers and activists.  The field for marijuana testing and exploration is wide open, and lawyers will be watching every court decision like a hawk.  Do you want to see marijuana legalized nationwide? Don’t drive high. Prohibitionists are looking for ammunition. Enjoy your cannabis, don’t be the bullet.

>Statistics and Trends Take Time
>Legalizing Recreational Marijuana: As Dangerous as a New iPhone?
>Crime Reported in Colorado
>Denver Crime Statistics 2013 and 2014
>What About Colorado Youth?
>What about Alcohol?
>Are Pot Smokers Ruling the Roads?

>Is it Dangerous to Drive in Colorado?
>Colorado Accidents Facts – 2012 to 2014
>Did DUIs Increase in Colorado After marijuana Became Legal?
>Increased Attention to “Drugged Driving”