It took decades to chip away misinformation and propaganda that kept marijuana prohibition the acceptable norm. It took decades to determine what policies were effective in reducing alcohol-related DUIs and what strategies were most likely to reduce underage drinking. As the 21st century brought with it a “knowledge economy,” it should not take decades to determine the effect of recreational marijuana legalization, but it may.

Technology enables policy effectiveness to be reviewed more quickly and more efficiently, but government bureaucracy, red-tape, politics, and necessary fact-checking procedures slows down availability of data. Media and non-peer reviewed data often skews views of causations, correlations, and relational severity. For instance, some media outlets have declared that an increase in emergency room visits is due to the legalization of marijuana, others declare it’s a result of the Affordable Healthcare Act. Biased reports will use the phrase “increased 100%” or “doubled” when a number shifts from zero instances to one—even if it’s one case out of five million and statistically insignificant. Marijuana tracking of DUIDs by Colorado police only began in 2014, therefore a 100% increase could falsely be reported due to a value of 0 in the previous year where no previous tracking occurred. Also, the fact that marijuana is legal leads to the logical conclusion that more people will be willing to admit using marijuana, whereas the fact may have been previously withheld due to fear of criminal prosecution.

Unfortunately, these reports are carelessly used by others with similar agendas. One example of this is a 2014 report by Rocky Mountain High-Intensity Drug Trafficking Area (RMHIDTA), which is often cited and has been used by the State of Indiana. The group is against legalization, and the data is presented in such a way to support their agenda for marijuana prohibition. Of course, groups that are pro-marijuana legalization can (and do) similarly manipulate words and data. However, studies that offered more scrutiny than the RMHIDTA and examined long-term trends, found medical marijuana is not predictive of higher crime rates, and it may even reduce crime.

The data in the oft-cited RMHIDTA report will not be addressed in this article, as the bulk of their data covers medical marijuana legalization time frames. We will be taking a look at the first two years of recreational marijuana, 2012 to 2014. The cohort of medical marijuana users—the disabled and chronically ill, and the mentally and physically disabled—often differ in decision-making, daily habits, and risk-taking behaviors than the general public. The psycho-socio-economic background of medical marijuana users can be quite different from the statistically “average” recreational users. Unfortunately, we cannot disseminate the two groups while evaluating trends, and will have to leave that for the scientists, doctors, economists, policy researchers and statisticians.

It was in 2012 that Colorado made recreational marijuana legal. Amendment 64 was voted on November 6, 2012, and signed by Governor Hickenlooper December 10, 2012. Amendment 64 is now published as Article 18, Section 16 in the Colorado Constitution. Though medical marijuana was made legal in Colorado back in 2000, 2012 is truly the beginning of the end of marijuana prohibition.

Legalizing Recreational Marijuana: As Dangerous as a New iPhone?

With the implementation of any new form of recreation, whether it’s the new iPhone or a cannabis candy, there is a peak of first-adopters, a peak of exploration, and a peak of onlookers. Recreational marijuana is no different. The laws for recreational marijuana are new. Citizens will test out what they don’t know, onlookers will be watching what happens, determining whether or not they wish to participate, and they’ll be voicing their opinions and watching the reviews. The police will be facing a new swarm of uninformed citizens. Similarly, when a new iPhone comes out, the first adopters take it to its limits. Features are tested to (and past) the declared limits, and hackers test out how much hacking the iPhone can take. Meanwhile, the crowd waits for reviews and the price to drop, and the Apple staff spends more time on the new iPhone, selling it and fixing it. From 2012 to 2014, recreational marijuana was to Colorado what a new iPhone is to Apple.

Of course, there will be more marijuana-related incidents since marijuana became legal. It was illegal, now it is legal, and there are more users, and not all of them are experts at handling the recreational devices put in their hands. New recreation opportunities bring out the curious explorers and the tempters of fate. With new laws, come new reasons for arrests. With new products come new dangers. (Welcome to the world of capitalism.)

A new car can have all the safety features in the world, but if an inexperienced driver is driving, it suddenly becomes more deadly. Cars have recalls, food can cause food poisoning, alcohol can cause alcohol poisoning, household products and work environments have toxins, and guns misfire. Kids fall down stairs and off trees, and athletes suffer concussions and break bones. Do we get rid of cars, food, alcohol and guns? Do we stop people from being active and from exploring? Or do we manage and regulate to reduce dangers and allow for the freedom of activity and personal enjoyment? No world is 100% safe. The first two years of recreational marijuana were likely to be the most dangerous because legal recreational marijuana use was a novel recreational opportunity. Fortunately, those first two years weren’t very dangerous.

The Colorado Bureau of Investigation (CBI) collects crime statistics through the Uniform Crime Reporting Program (UCR). Law enforcement agencies are required by law to provide the CBI with crime data per Colorado Revised Statute 24-33.5-412.(5). Keep in mind, law enforcement is generally against marijuana legalization, and some Colorado Sheriffs are suing the federal government over marijuana legalization. Despite the potential reporting dangers, CBI records show that the overall crime rate only went up 1/10 of a percent from 2012 to 2013, and this rate factors in population changes. Clearly, state marijuana legalization does not bring with it a sharp increase in crime.
The following chart is from the CBI report, Crime in Colorado 2013. 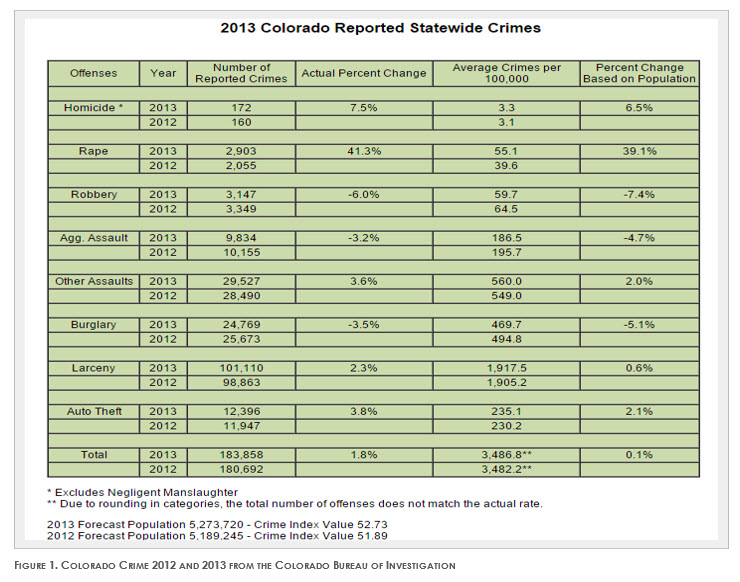 Numerous factors contribute to crime, and none of these increases or decreases can be attributed to legalized marijuana use without examining the location of the crime, marijuana availability, and individual crime case records. It also important to take in local and national trends when examining statistics. From 2012 to 2013 there has been a movement to encourage women to report rapes, and police agencies have been under scrutiny for mishandling rape cases. In 2013, the definition of “forcible rape” in the UCR program was changed, and therefore law enforcement agents unlikely to report “forcible rape” before, may have reported it under the new definition.

Prior to 2013, the FBI’s UCR Program collected rape data in the Summary Reporting System under the category “forcible rape.” In 2013, the program removed the term “forcible” from the title and revised the definition. The legacy UCR definition of rape is “The carnal knowledge of a female forcibly and against her will.” The revised UCR definition of rape is “Penetration, no matter how slight, of the vagina or anus with any body part or object, or oral penetration by a sex organ of another person, without the consent of the victim.” – Press Release, FBI Releases 2013 Crime Statistics, November 10, 2014

Robbery, Aggravated Assault and Burglary saw decreases, however since the first marijuana retail dispensaries didn’t open until January 2014, examination of 2014 and 2015 statistics is warranted. The Crime Index Value raised less than 1%. Statistically speaking, there was barely a blip in crime during the first year of legal recreational marijuana. 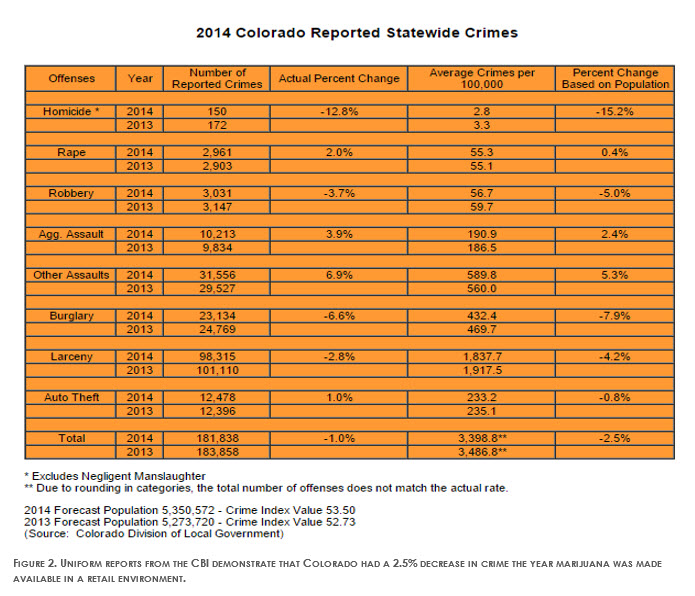 In 2014, there was an overall 2.5% decrease in crime per 100,000 of the population, per the Colorado Bureau of Investigation. As marijuana became more widely available in the state and retail cannabis stores opened, crime continued to decrease.

The first year of recreational marijuana saw $700 million in pot sales, and 2015 sales are even higher. As recreational sales continue to grow, will crime continue to decrease? Only time will tell.

The entire state of Colorado has not embraced recreational marijuana legalization, and many towns are doing what they can to keep marijuana out of their borders. Colorado Springs and dozens of other cities banned retail sales of marijuana. Thus, a city that openly embraces marijuana legalization is a better representation of the potential consequences of such an act. Denver, Colorado’s capital, is the perfect example.

Using the same uniform standards, we can look at the statistics from 2013 to 2014 and see an overall decrease in crime of 1.8% in the city that embraced marijuana legalization. 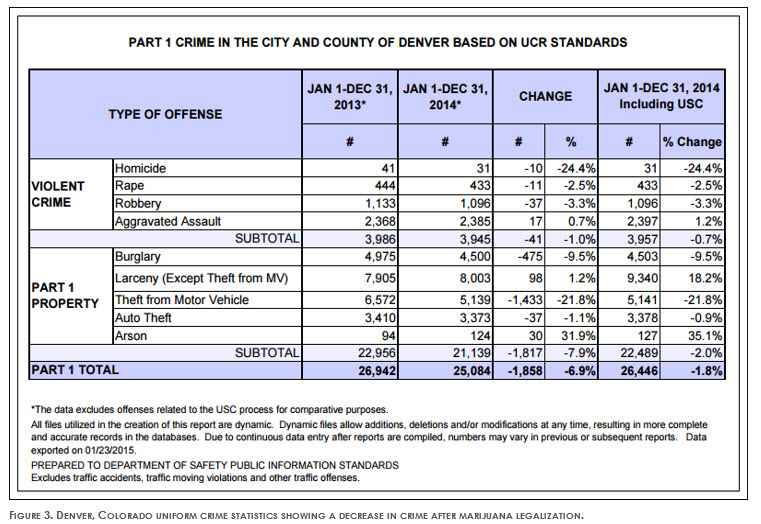 What about Colorado Youth?

The Youth Risky Behavior Survey from the Center for Disease Control showed no significant changes in marijuana use from 2011 to 2013, however, Colorado was not included in the 2013 survey because the response rate was under 60%. However, we can look at an SAMSHA (Substance Abuse and Mental Health Administration) report to find 2014 Colorado data on Colorado Youth and substance abuse. The SAMSHA report, Colorado 2014 Mental Health National Outcome Measures (NOMS): SAMHSA Uniform Reporting contains the following footnote:

In FY2014, the number of substance abuse diagnoses that included V71.09 (diagnosis deferred) was significantly lower than in FY2013. In FY2014, over 600 had this diagnosis, whereas almost 4,000 did in FY2013. In FY2013, this diagnosis was disproportionately given to youth under 18 years old compared to adults. Given the substantially lower number of this substance abuse diagnosis (probably affected by CCAR training), the percentage of children/adolescents with a co-occurring substance abuse disorder also decreased. – SAMSHA, Colorado 2014 Mental Health National Outcome Measures, page 28.

Substance abuse diagnoses in Colorado has decreased for adults and youth.

Statewide, and in Denver, marijuana treatment admissions have decreased since legalizing recreational marijuana.

Many pro-cannabis organizations believe that alcohol use will decline with the legalization of marijuana. SAMSHA reports that there was a decline in alcohol dependence between 2012 and 2013, the first year the recreational marijuana was made legal in Colorado. 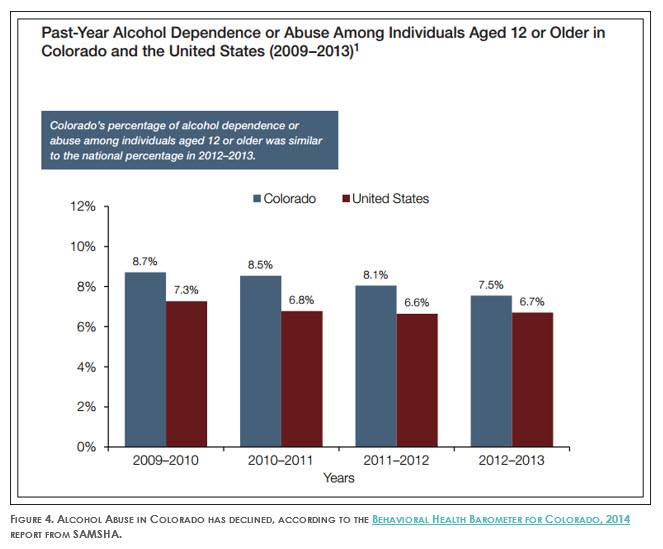 Are Pot Smokers Ruling the Roads?

According to the Colorado Department of Transportation, 5% of 2012 drugged driving incidents involved marijuana, and in 2013, 36 of 288 drivers tested had marijuana in their system. The CDOT does not state whether marijuana was the cause of the accidents, and individual case studies should be examined. During 2012 and 2013, the number of drivers involved in a fatal accident testing positive for cannabis remained the same.

Colorado will surely see more changes, but 2012 to 2015 are the years most likely to suffer the worst consequences of marijuana legalization. Fortunately, the nightmares projected by the marijuana prohibitionists haven’t occurred. There are challenges to legalizing recreational marijuana, but education and intelligent policy-making can ensure that Colorado citizens can enjoy their liberty to consume cannabis, with no more harm than the many other leisure activities available in the great Rocky Mountain state.

>Statistics and Trends Take Time
>Legalizing Recreational Marijuana: As Dangerous as a New iPhone?
>Crime Reported in Colorado
>Denver Crime Statistics 2013 and 2014
>What About Colorado Youth?
>What about Alcohol?
>Are Pot Smokers Ruling the Roads?

>Is it Dangerous to Drive in Colorado?
>Colorado Accidents Facts – 2012 to 2014
>Did DUIs Increase in Colorado After marijuana Became Legal?
>Increased Attention to “Drugged Driving”